Grimag, an Ad Optimized WordPress Theme that Will Keep Ad Blockers Away

Are all WordPress themes created equal? To see that, visit the ThemeForest market, and randomly open 20 themes. You’ll notice that along the usual boilerplate marketing wording such as “unique,” “modern,” “bug-free,” “revolutionary,” at least half of them will come with the “ad-optimized” tag. 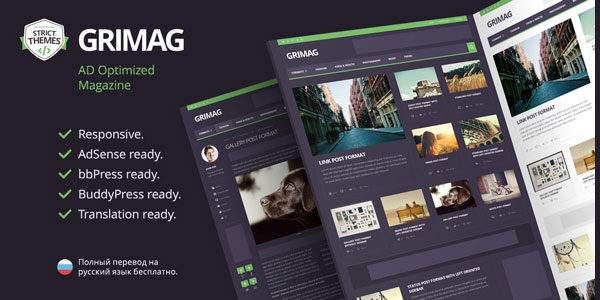 Table of Contents hide
Ad Monetization
The Ad Phenomena
Blocking the Ad-Blocker
The Ad Problem
WordPress, the Best CMS for … Ads?
Grimag Is an Ad-Optimized WordPress Theme for Creators
Responsive AdSense
Get Creative with Grimag
What’s Under the Hood?
Conclusion 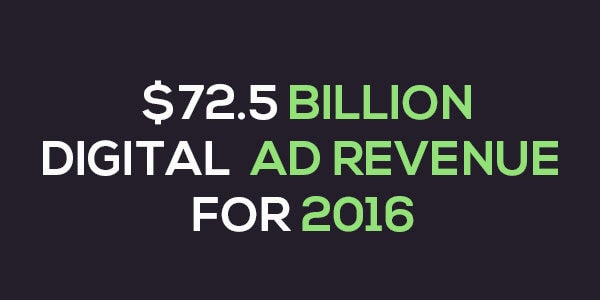 While there are quite a lot of monetization options available, none of them is as simple as placing ad code in the HTML of one’s website. According to the Pricewaterhouse Coopers IAB Internet Advertising Revenue Report, advertisers spent a staggering $72.5 billion on ads. Of course, not all websites are powered by ads, or even have ads on their platforms, but quite a lot of them are relying on ads to get traffic, visitors and, eventually customers. 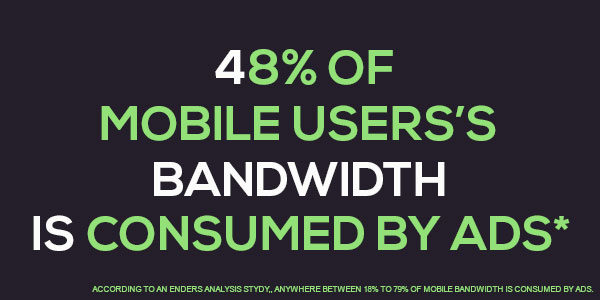 Fundamentally, as a concept, ads are a beginning. However, the biggest problem with ads is that most of them are intrusive, useless and annoying, especially those auto-play videos that replaced gif ads. Powered by tracking agents, cookies and other invasive privacy tools, ads have become a privacy issue for consumers and publishers. 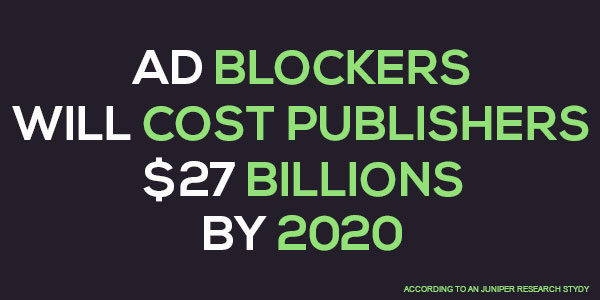 Ads can be easily blocked. While a few years ago, ad-blocking was a geeky thing, nowadays, more casual users are enabling ad-blocking in their browsers. In fact, browsers already have built-in ad-blocking functionality. It takes less than 5 minutes to enable an ad-blocker in a browser and, once enabled, most users won’t disable them. 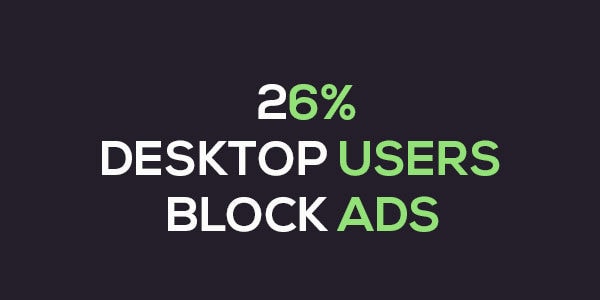 If we somehow cut all the ads from the web, thousands of websites will quickly find their way into the internet’s archive. For publishers relying on ads to monetize digital content, such a scenarios would prove to be insurmountable.

A web without ads will never be a reality. While alternative business models may work for some publishers, the truth is that most of the web can’t function without ads. Publishers that can’t sustain themselves with alternative monetization avenues will quit. And this will be the end of the web as we know it. Without diversity, the open web may become a closed medium. And that’s not something we may want.

I am not an ad apologist. As a consumer, I hate ads, yet, I use ad-blockers on a blacklist base. Annoy me with your ads, and I’ll blacklist you without looking back. Auto-play videos? Broken layouts? Junk ads or promoted articles that have no relevance whatsoever to your website? It’s the blacklist for you. And the excuse that it’s the ad network’s fault, won’t cut it. It’s all about supply and demand. 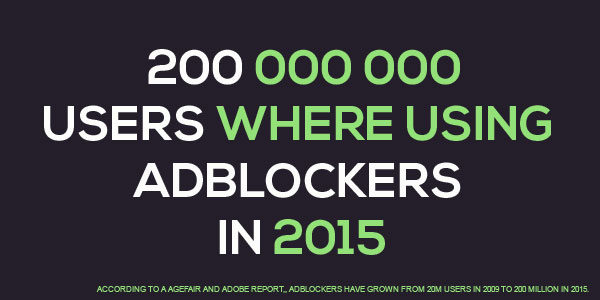 We are all to blame for the “ad problem.” Editors are at fault for erratically joining ad networks and displaying junk ads, developers for badly written code, designers for poorly designed layouts, and so on. Ad code can be placed anywhere in any HTML page, yet, it’s all about carefully integrating ads with content. Effectively, ads should stand out as a seamless continuity of your content.

It’s up to us, designers, developers, writers, editors or publishers to design great layouts, craft elegant code, write interesting articles and publish content that will appeal to visitors so that they won’t have to enable ad-blockers.

WordPress, the Best CMS for … Ads?

WordPress, the popular CMS that powers a significant chunk of the web, is also the biggest platform for add delivery. With WordPress, placing ads on your website is as easy as placing ad code in a sidebar widget. 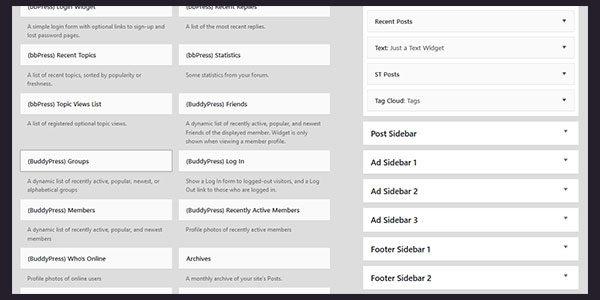 However, while virtually every WordPress theme out there supports ads, not all themes are born equal. Accommodating ads makes a huge difference in the design and overall layout of a theme. Building an ad-friendly theme adds a significant layer of complexity in the process of creating a sleek and efficient theme both from a UX and a monetization point of view. It’s all about finding the balance between content and ads. And no, ad-plugins won’t do the trick.

Grimag is a WordPress theme that offers a viable solution to the ad problem. It won’t block ad-blockers for you. Instead, it will help you serve ads that work, so you can focus on content.

The theme has more than nine hotspots to place advertisements. The ads can be placed on top of the header, bellow a title, in sidebars, including sticky sidebars, above a post, bellow a post and even in the footer area. 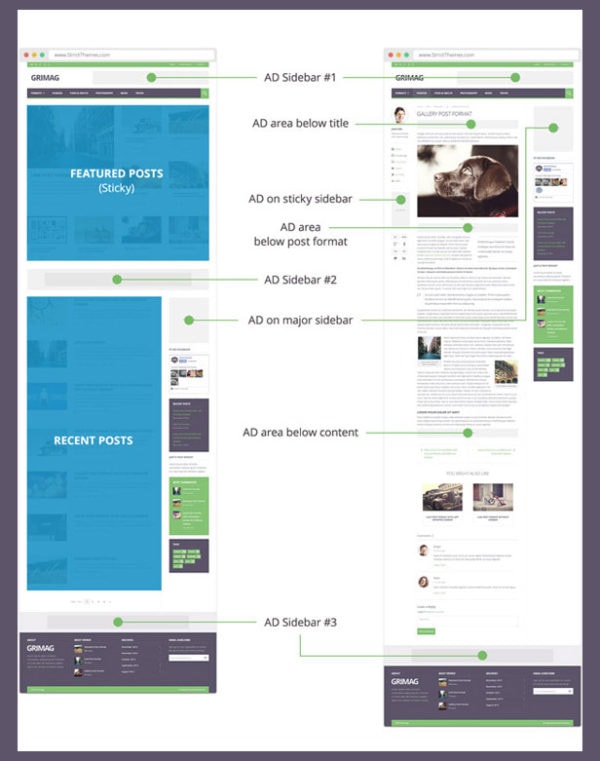 With so many add spaces, one can assume that Grimag will look a lot like an ad farm. That’s not the case. The ad positions are in prominent places and blend perfectly with content, without distracting visitors, but at the same time remain visible. While at its core, the developer built the theme around ad placements, Grimag is intended to be a theme for content creators. 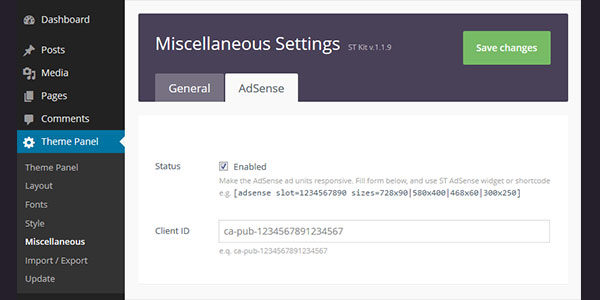 Grimag is also optimized for AdSense, especially in responsive scenarios. The built-in tool, which can be conveniently enabled by selecting a checkbox from the theme panel, will enable the responsive ads option. Each ad unit has its unique ID that can be associated with an ST AdSense widget. With this option enabled, ads will be limited to predefined sizes. To place AdSense units in the body of a post and above or below, a handy shortcode is provided. 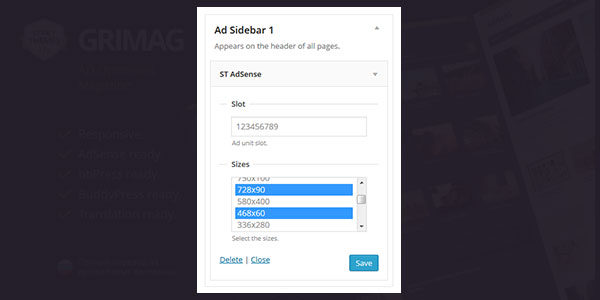 It should be noted that not all themes provide this functionality. Usually, responsive AdSense is supported by various third-party plugins that come with a price. However, I’ll take a theme that comes with built-in functionality rather than installing another WordPress plugin.

Grimag is not only about ads. It’s a functional and flexible WordPress theme packed in a minimalistic design. It features a 300px sidebar that can be enabled on all pages, unlimited sidebars that can be assigned to individual pages, multiple footer layouts and more. 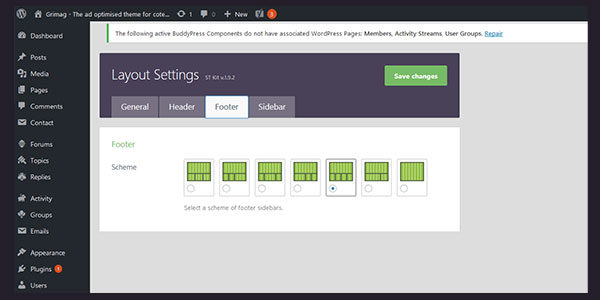 The theme has two skins, light and dark, that can be easily customized with the built-in visual editor. Grimag will look great on any screen, including high-resolution displays. 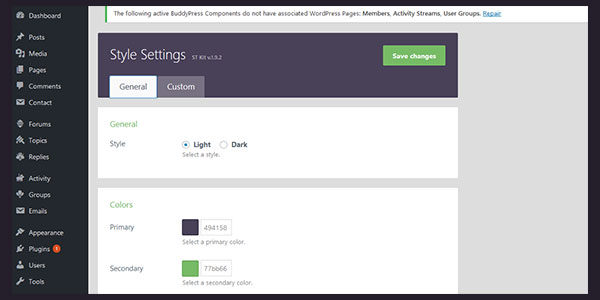 Also, the theme comes with five widgets, 100+ high-quality icons, and more than 600 Google fonts, plus all the shortcodes you’d expect from a premium theme, including columns, buttons, tabs, and even a pricing table. 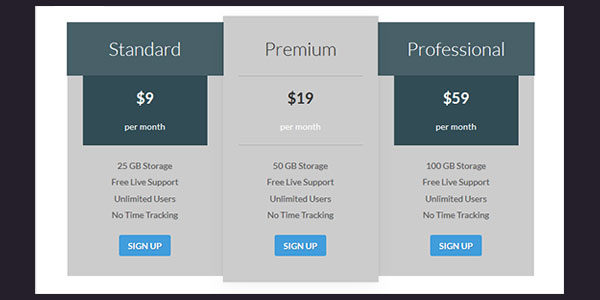 Grimag has eight post formats, each with custom options, for a total of 26 post styles. In addition to the Standard post format, Grimag is designed for Image posts, Gallery posts, Audio and Video posts, Link and Quotes posts, and even an option for Status posts. The Gallery and Video post support both self-hosted and embedded media content. For each post, page or project you can add subtitles. You can also enable sticky posts. The authors were generous enough, so you can display up to 50 sticky posts. (It’s not something you’d really want to do, but who knows.) 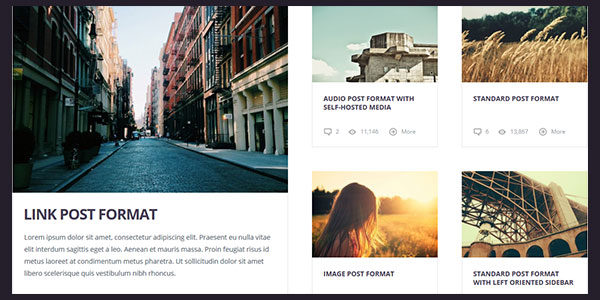 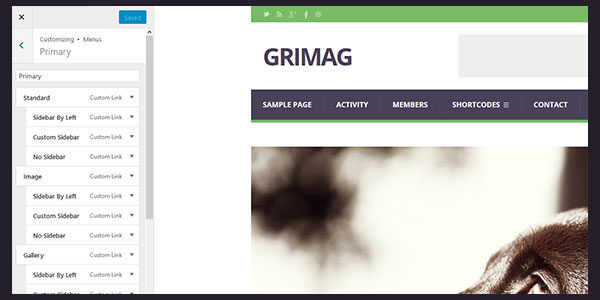 What’s Under the Hood?

The theme options panels is a Swedish knife. All the options are laid out in an intuitive and hassle free interface. Here you’ll also find quick access to usability hacks where you can edit the logo, the favicon or your social network icons with a few clicks. 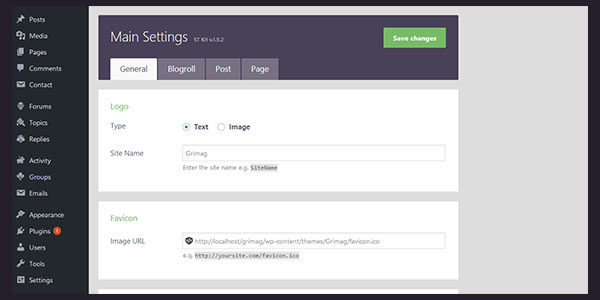 The theme is Google Analytics ready and is also designed with the best SEO practices in mind. In addition to that, it’s 100 percent compatible with Yoast, the SEO plugin. You’ll just need to throw some quality content to match the theme’s offerings.

Grimag is powered by high-quality code. The HTML is W3C compliant, and the CSS styles are structured logically. Those who like to tweak the code will find the code well-readable and well commented. In fact, you’ll enjoy tweaking the theme.

Grimag also comes with an extended online documentation that covers every feature and option. The documentation is backed up by top-tier support and free bug fixes. In addition, Grimag is tested on beta versions of WordPress so that it can be safely updated to the latest releases from the built-in updater.

The theme also comes with a one-click install feature. The set-up wizard will install and any dependencies in less than 5 minutes, and the dummy data that comes with Grimag will allow anyone to quickly replicate the demo site.

Additionally, Grimag is built to be compatible with the most popular plugins you may want to use to build the ultimate online hub such as BuddyPress, Yoast SEO or bbPress.

Grimag is a balanced theme, packed with a lot of features and add-ons, that it’s both elegant and functional. While it’s advertised for online magazines, Grimag can be used for many other purposes. The theme is based on St Kit Framework, Strict Themes custom framework that powers most of the developer themes. It’s optimized to work with many popular WordPress plugins, you get an extendable platform, that is customizable and user-friendly.  It’s translation ready and comes with great features and options to deliver content that matters. Plus, Grimag will appeal to those looking into ad monetization.

Grimag won’t solve your ad-blocker problems. However, if I run into you website, chances that you’ll remain on my ad-block whitelist will increase radically. Grimag is available for $59 on ThemeForest. It’s a modest price to pay for an elegant and flexible theme that, in the long turn, will return the investment.