What’s in a grid? A grid-style framework is the backbone to almost any web design project, providing the structure for your site as well as a way to organize content, elements and images.

There are a variety of grid systems out there that you can buy or download free. You can also create your own if you are feeling ambitious. But one thing is for sure, you can probably benefit from using a grid system in your projects. (Every one of the website examples in this post did.)

What is a Grid? 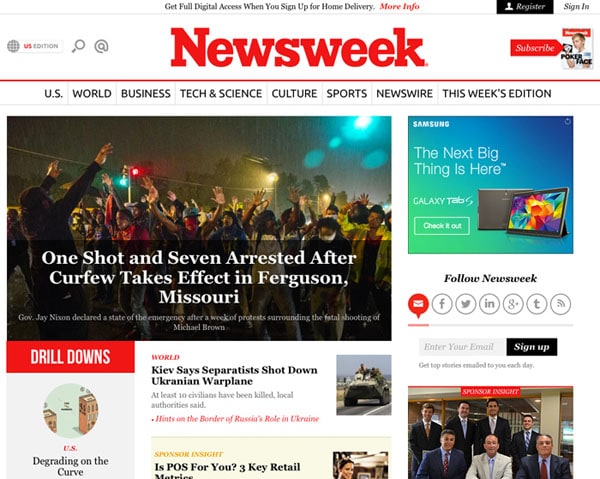 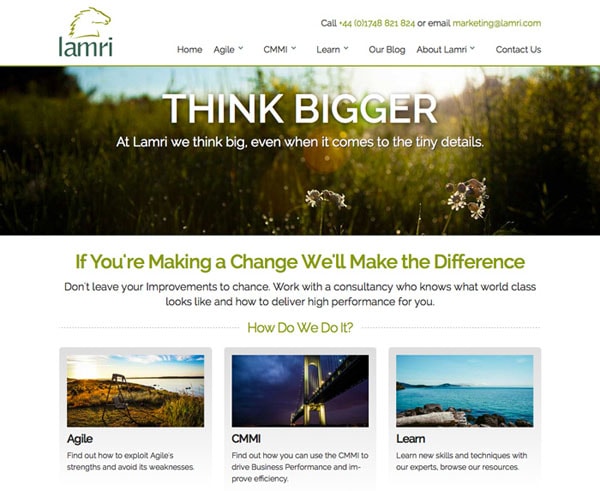 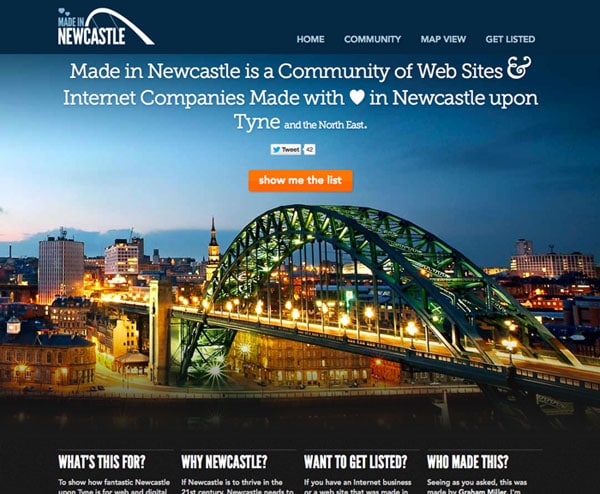 A grid is a set of invisible lines – that run vertically and horizontally – that help you dictate where to place content. The structure is designed in columns and rows of equal spacing with a margin (or gutter) between each.

Grid systems have been around for a very long time. Print designers use them and grids are making their way into more and more digital design projects. In web design, many of these grid systems come in the form of frameworks, which have become a standard format for creating websites.

The benefit of using a grid is that it helps organize content to create a consistent design. While users will never actually see your grid, designing on it will create a sense of flow and harmony, making your final product much easier on the user in terms of aesthetics and use. 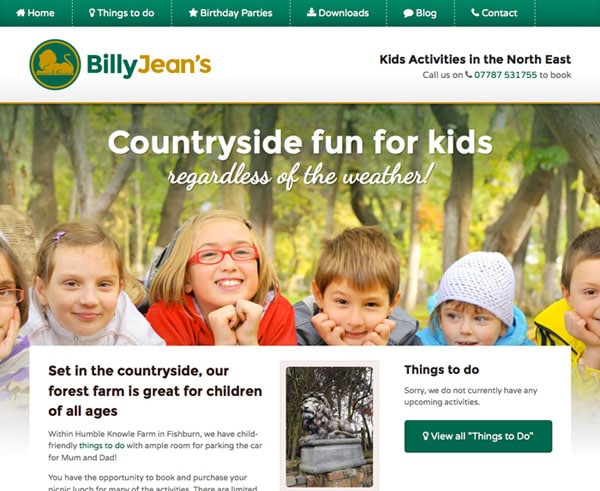 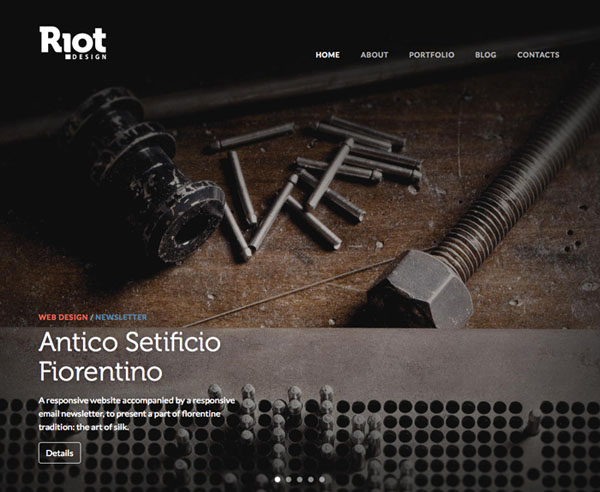 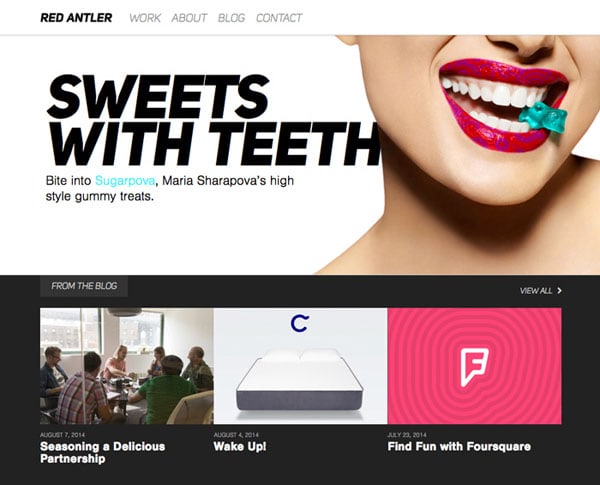 Grid systems can really help a designer of almost any experience level complete a project with ease and consistency. But some designers still aren’t complete fans of using this technique. 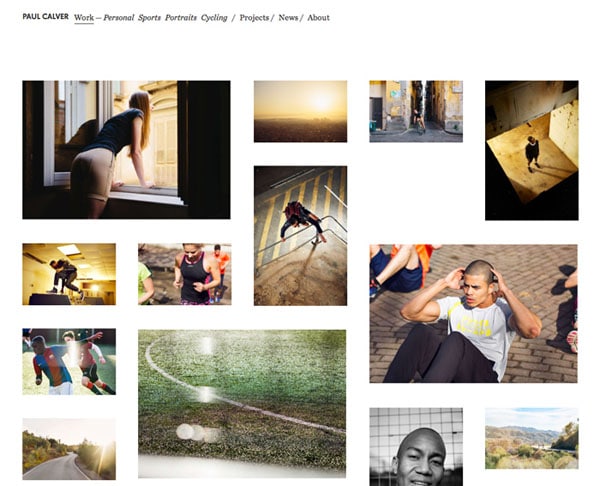 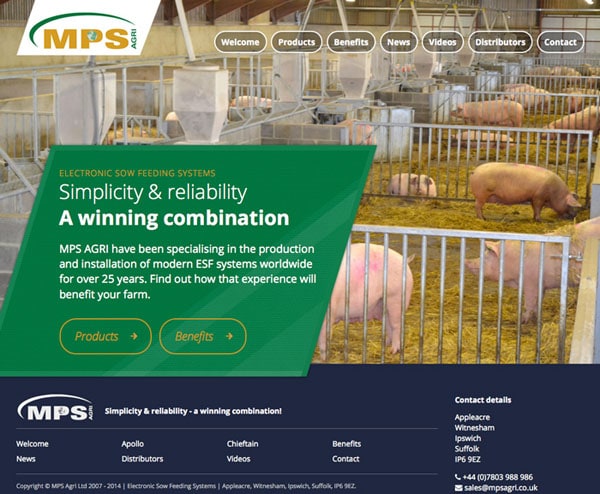 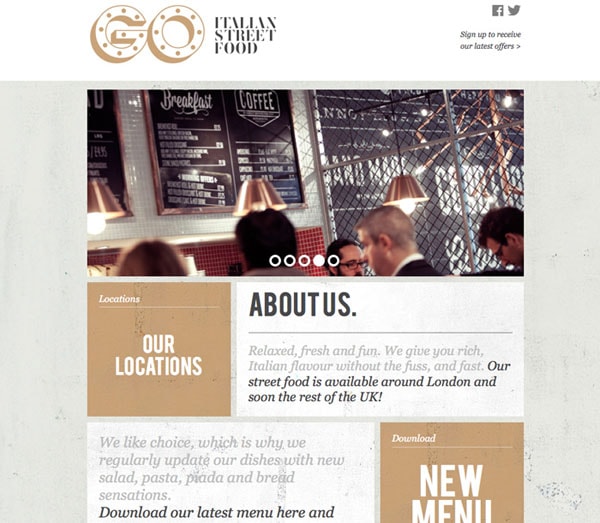 Historically, there are four basic types of grids – manuscript, column, modular and hierarchical. Add to that the most important type of grid system in today’s web design world – responsive.

Manuscript grids are developed in the form of blocks. These blocks determine the location of elements in the overall frame of the design. This grid style works for large blocks of text. Consider using it for the frame that will contain body text in a blog.

Column grids are exactly what you might expect – columns that run vertically across the page. Many grid systems contain some type of columnar format for organizing content. This is a common practice in web design.

Modular grids are an extension of column grids. They include both columns and rows to organize information. (Think about a table, for example.) A metro-styled website would be based on a modular grid.

Hierarchical grids are a more organic grid format and use a set of like objects to create vertical and horizontal space. In many cases, objects are placed on the canvas and then arranged in to some sort of order. Designers who create their own grids or base a system off a document grid are likely using this format.

Responsive grids are part of the hard coding of a website that give instruction for how the grid itself will shrink or expand based on device size. The responsive grid is based on percentages to determine size and placement rather than a hard canvas size. Most designers use a framework to create responsive grids to save time. There are a lot of responsive grid frameworks available for use, many of which are open-sourced and can be downloaded free.

When it comes to web design and grid systems the one thing you need to be mindful of is responsiveness. More than likely you will want a responsive framework for your project. Too many websites are viewed on too many device types to ignore responsive web design.

Here are 11 popular grid systems (and they’re all free): 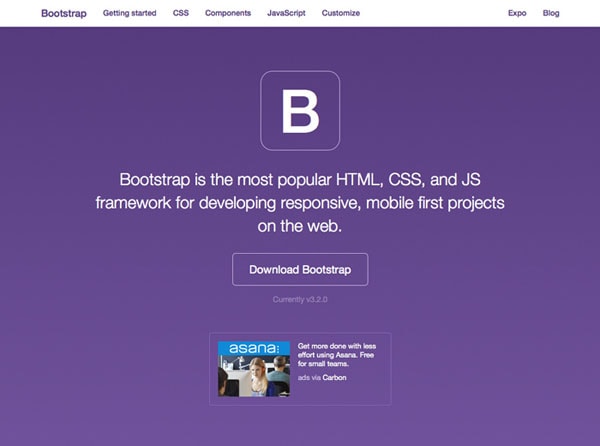 Currently, the most popular framework being used on the web. 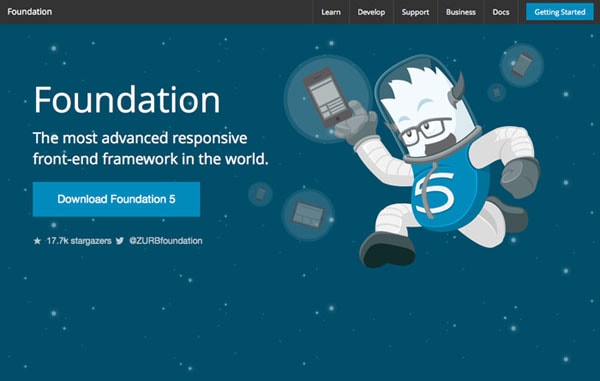 This framework touts speed and is fast for users, faster for designers and developers and easy to learn. 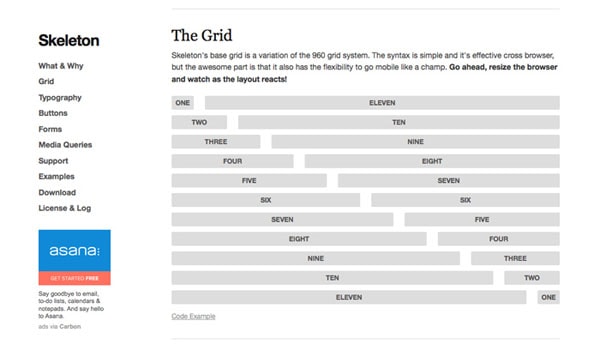 This framework is a collection of CSS files and includes a base 960 grid that scales for every device. 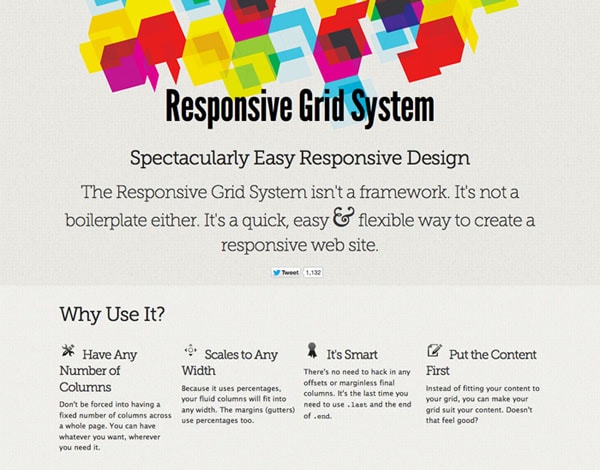 This grid system is just that and allows you to customize the number of columns and then plug it right into your design project. 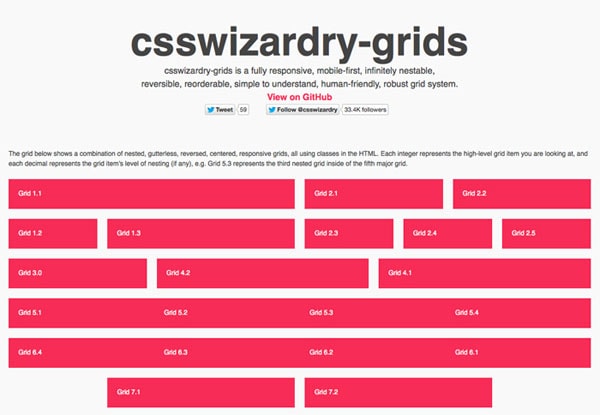 This grid system is nestable, reversible, easy to understand and robust. 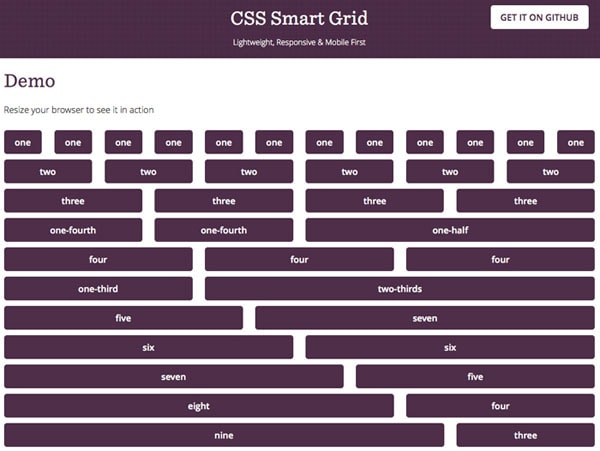 This grid builds on the popular 960 concept and scales for a variety of devices.

This grid works by nesting cells within rows and includes adaptive and fluid grid options. 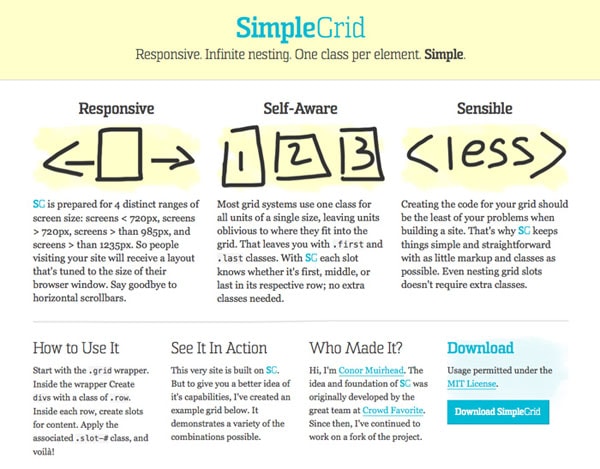 The grid system uses infinite nesting, one class per element and is simple to use. 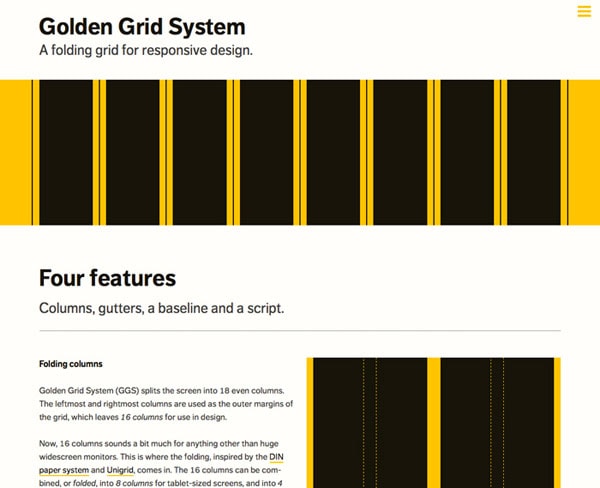 This system features “folding columns,” gutters, a baseline and script for a complete grid system vertically and horizontally. 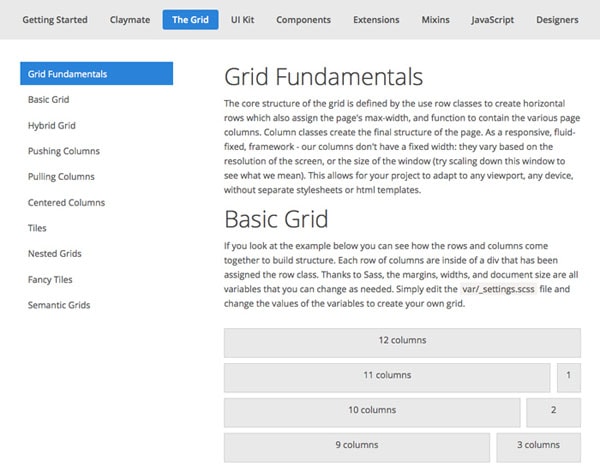 This framework uses a grid defined by row classes to create horizontal rows which also assign the page’s max-width, and function to contain the various page columns. 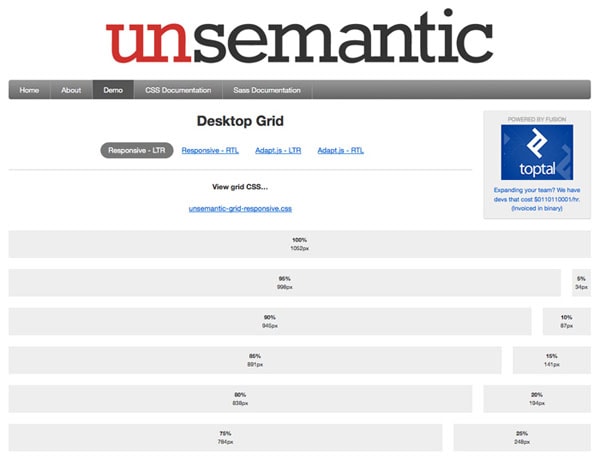 This is the responsive successor to the popular 960 Grid System. It works like 960 but uses percentages for the grid rather than static pixel sizes.

10 Tools to Create Your Own Grid

A framework or grid system may not be the best option for every designer or developer. But there are some tools out there to help you get started even if you want to design your own PSD grid.

Are you ready to design with grids yet? Now that you have the tools what are you waiting for?