How to Speed up the Design to Development Handoff: Use Justinmind

Looking for a tool that designers and developers can agree on?

Justinmind is made for web and mobile app prototypes and Hi-Fi website wireframes. It has all the capabilities expected in prototyping tools such as resizing, drag and drop placement, formatting and more.

In addition, it features a lot of goodies including widget libraries, reusable components, conditional logic, animations, calculations, simulations, and even prototyping simulation with actual data. It also comes with built-in collaboration tools, aimed at allowing designers and developers to work together.

Anyone working in the digital ecosystem is aware of the communication gap. It exists between the business world and the software world on the outside and designers and developers on the inside. The need for a common language is obvious. The solution is not. Specification documents or diagrams are obsolete. Few people read them, and even fewer understand them.

I’ve run into this issue countless times, and I’ve always improvised. Sometimes it worked, sometimes it didn’t. Most of the time, the communication gap resulted in hidden gaps and a lot of tension.

The cost of deficient communications inside a team is code refactoring. A minor misunderstanding may result in radical changes. Even if it’s not the live product that has to be changed, the cost in time and money necessary for adjustments and rework can be crucial in defining the success of the project. However, the biggest problem is something we usually like to hide. Let’s spell it loud: code refactoring is bad for your team morale. We all know the feeling that comes with “back to the drawing board.”

My latest career shift is acting as a product manager for a small, yet ambitious start-up. What was supposed to be a relaxing stint from 9 to 5 turned out to be a nightmare. Until now, even if I had the opportunity to lead big teams, there was always someone above me, overseeing and intervening when things went off the rails. I’ve learned a lot, and even wrote a few articles on dev-ops for designers and developers. I even fancied the idea of becoming a trainer in this kind of thing. Well …

Imagine this, an introvert leading a team of fully-fledged extroverts and coffee drinkers. World, meet my friends and dearest colleagues. Just to give you an even better idea, when they are not busy coding, designing and shooting at each other in some 3D shooter game, they are planning a trip to Antarctica.

Can Designers and Developers Get Along?

Writing articles on designer-developer interaction is easy. Implementing it is hard. A nice starting point (that works for me) is the following:

The last point is where I’ve failed my team. My usual toolkit, consisting of a projectpedia, a forum, versioning control, etc., was the weak link. And then came a revelation. 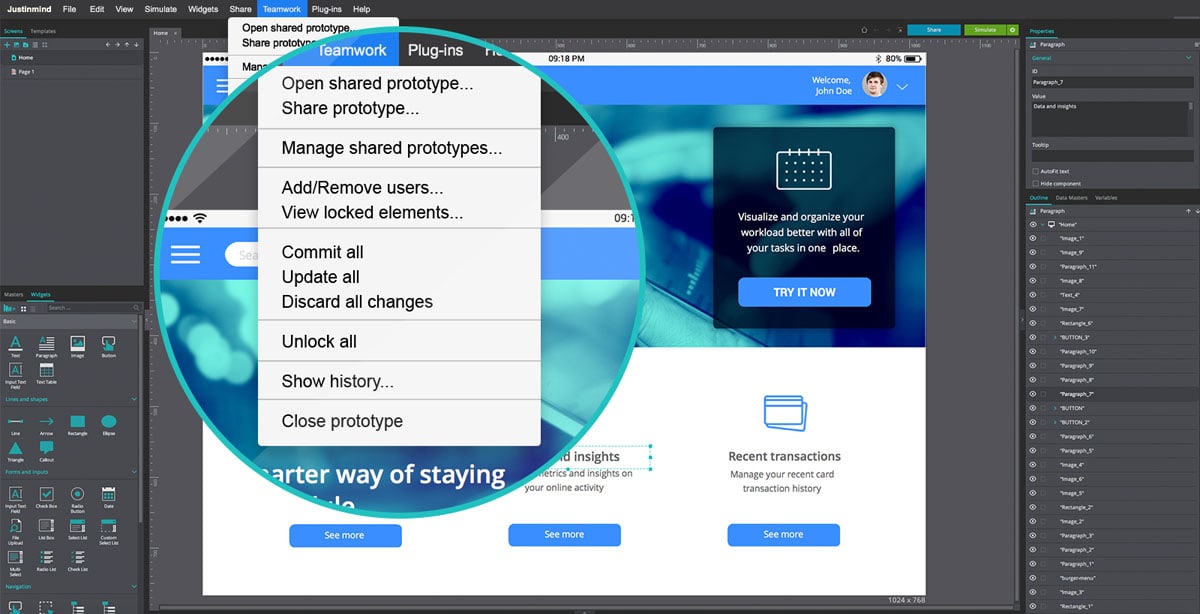 One of our designers shocked us with a prototype that felt like the real thing. On a close inspection, he proudly showcased Justinmind.

Justinmind was my favorite tool back then when I was just fiddling around with prototyping. It was the tool that allowed me to polish my skills, and jumpstart my career in digital. Somewhere along the line, Justinmind fell off my radar. And I lost a lot. 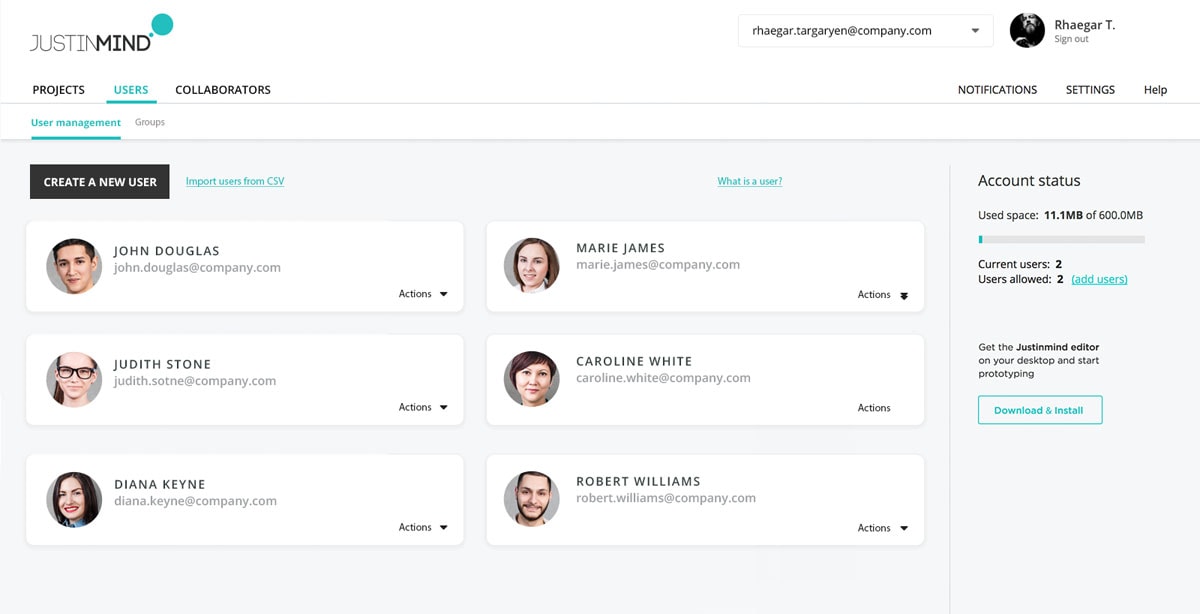 Now, Justinmind is in an eighth version. And it comes with some amazing collaboration features. And that’s exactly what I needed. 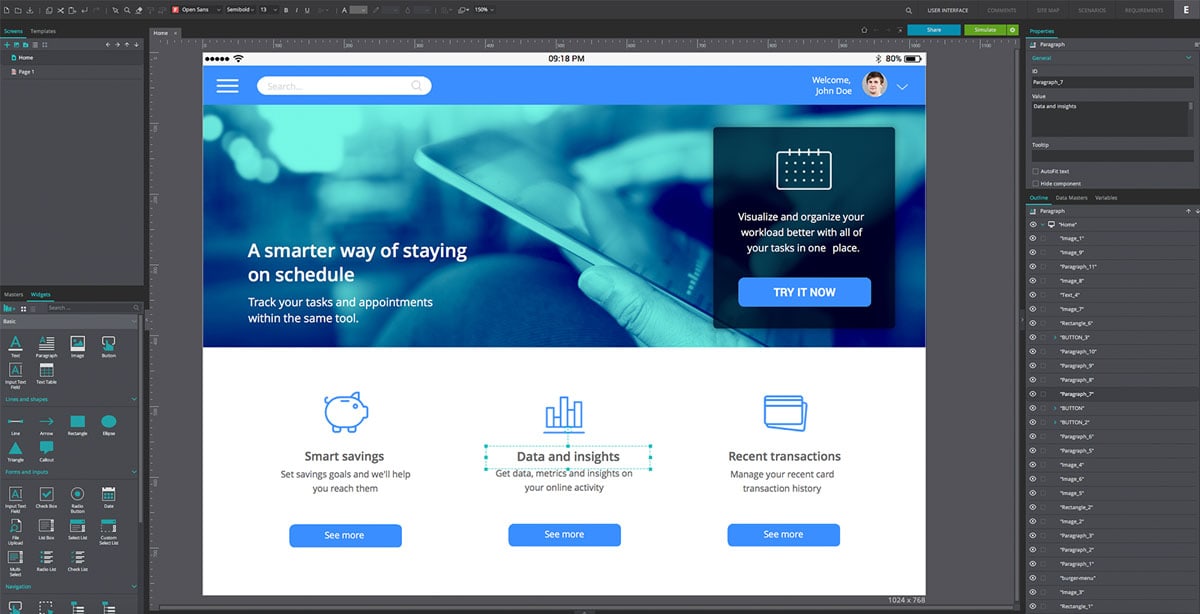 Justinmind is one of the best tools for designing and building interactive prototypes and wireframes which developers and clients will love.

It’s easy to use and intuitive. It’s designed to appeal to designers, and mimic the traditional tools they’ve got proficient in, but with a usability twist.

Unlike my usual prototyping tool, Justinmind comes with a desktop app which is a significant advantage both regarding speed and productivity.

Click and download. From there on, it’s drag and drop, tweak, refine, the way you want. A huge library of UI elements, a lot of customization options, style guides, and the awesome “Simulate” button will bring the Picasso from within any designer.

And it’s not just simple designs where Justinmind excels. Building and simulating complex apps, for example, a shopping app with cart functionality, is limited only by your needs.

Justinmind manages to shift the prototyping paradigm from a “designer exclusive” workflow to an inclusive paradigm, where developers are not only code scribes but also creators and contributors.

What is it that makes developers part of the product design and development cycle from definition to code?

The read-only developer mode, allows developers to inspect and test designs, grab images and CSS styles including attributes such as width, height, font, element alignment, line height, and color and padding. Additionally, developers can download a precise copy of the design.

In addition, they can comment, review, ask for clarification and even suggest new ideas by simply using the comment section, without a separate tool. 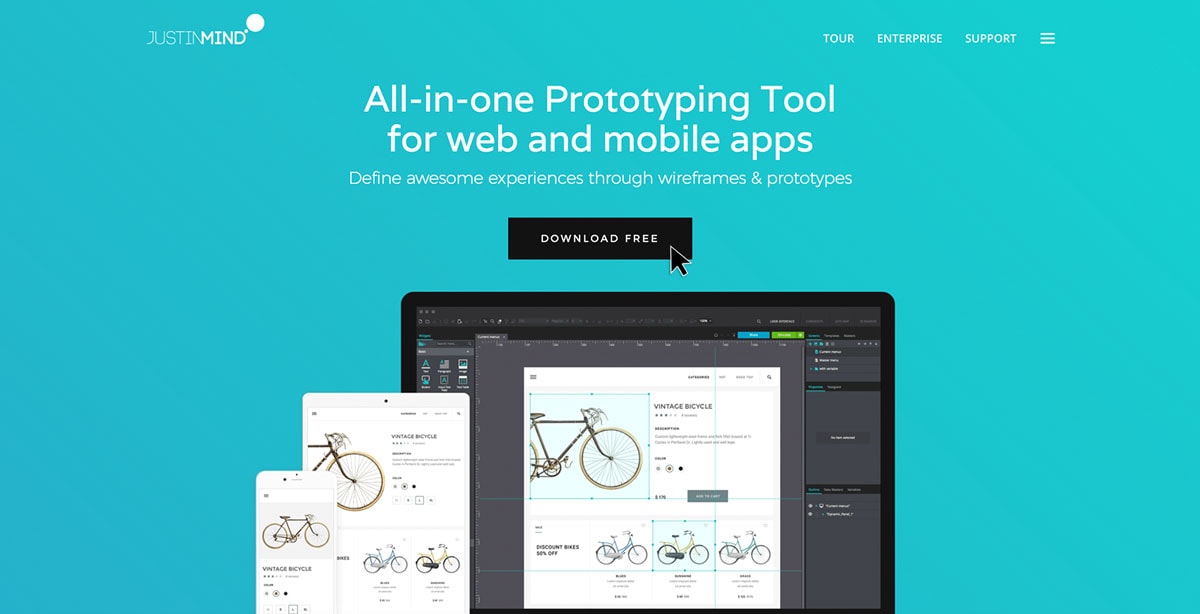 While it’s a disruptive app in the prototyping ecosystem, Justinmind is not aimed at blurring the line between skills. Designers still design interfaces and experiences, developers still implement them in practice, and project managers still get to do what they do best:

With Justinmind’s Teamwork features, leaders can manage all the team member involved with the product development including not only designers or developers but also any other relevant stakeholders. The built-in review system will keep everyone on track, and the commenting system will document each opinion. Each comment and piece of feedback can be tagged for solid management.

Project managers will enjoy the robust management module that allows full control over repositories, users, permissions, roles and access levels. A version history is available at any time for every design. No more panic mode. You should also note that Justinmind works offline. Anyway, here is a detailed workflow for further reading.

Getting Started with Justinmind

Justinmind works on Mac OS and Windows. Download a fully featured free version and test it out. Invite teammates, assign roles and start prototyping. Get the mobile apps, available for both Android and iOS, and keep your designs available at any time.

No time for a new tool? Don’t worry, Justinmind has a smooth learning curve. Still, it’s a good idea to check out the user guide, but only to be sure that you aren’t missing any of the benefits that come along. Furthermore, in addition to the comprehensive user guide, there are a lot of learning resources and video tutorials to help you get the most from Justinmind. 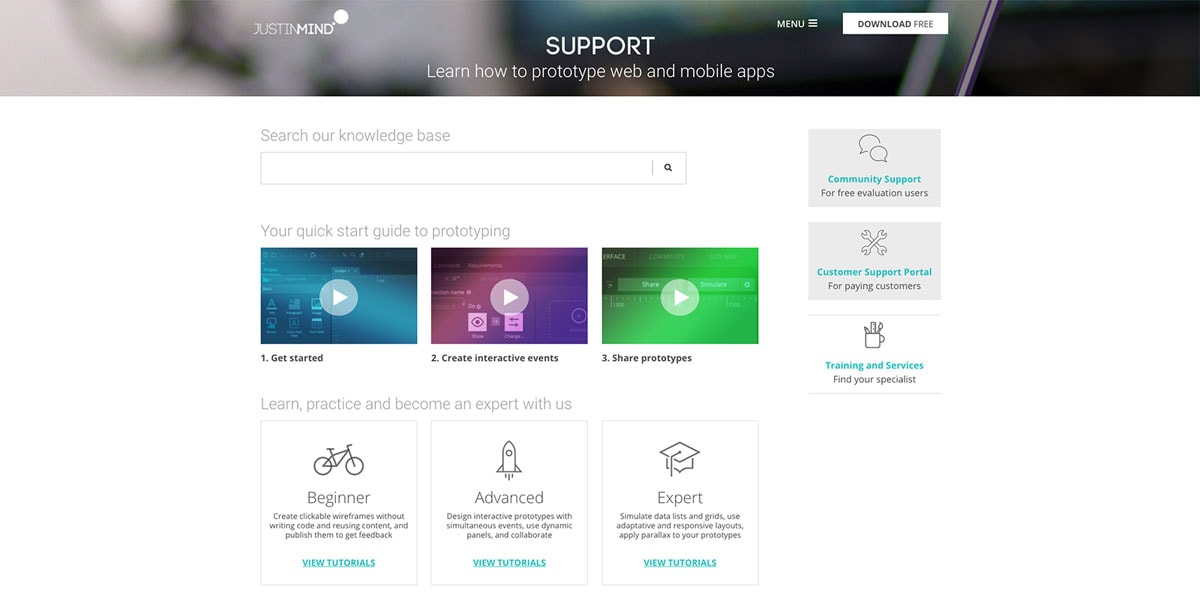 By the way, don’t forget to hint to your corporate “overlord” about Justinmind’s enterprise features. You’ll make your life better. Trust me. Finally, have a look at what the team behind Justinmind has to say about their latest developments. It’s a nice read.

However, the best way to experience Justinmind is to download the app and test the bundled in examples. In my case, this was more than enough.

And, by the way, about my job … Things got better. Much better.