The Ultimate UX Design of the Perfect CTA Button

Buttons are one of the most important elements to create, especially if you use them for calls to action. If you wait to the last minute, you may be risking your conversions. 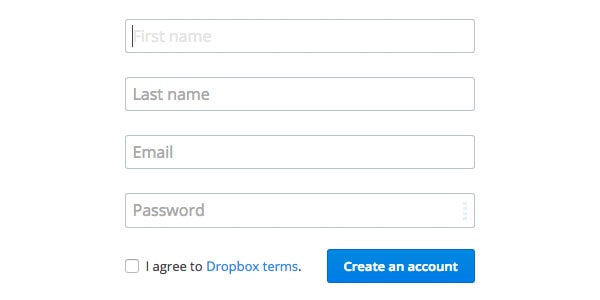 In this post, we’ll go over button size, style, placement and color — everything you need to know to create an effective call to action that improves the user experience.

The Importance of Buttons

A button placed in the wrong area of a page, which uses the wrong color, can stop a user in their tracks. The button is meant to direct users into taking the action you want them to take.

If they don’t take it, then the button has failed for one of the following reasons:

According to UX Movement, we can categorize all CTA buttons as:

UX Movement points out that you want to have clear color contrast because it helps users figure out what action to take. If your main CTA button blends in too much with the background or looks like any other button, then users will feel uncertain. At best, this will slow them down. At worse, they won’t click.

This is especially important for your users who may suffer from colorblindness. Colors can appear very similar to the colorblind user even when they appear completely contrasting to sighted users.

The red versus green button argument is a good illustration of why you should consider users with color blindness.

Let’s review the red/green debate briefly. Red typically implies “stop” or “delete” in most people’s minds. But there are those that hold fast that users are more inclined to click a red button over a green one. So the question becomes — which one to choose?

Take a look at the image above. On the left is how someone who can see colors would see the difference between red and green. On the right, look at how a colorblind user views the two colors — both of which appear as very similar shades.

As we described in Web UI Design for the Human Eye, the discrepancy is because red and green appear opposite each other on the color wheel (they complement rather than contrast each other). Faced with this, a colorblind user processing and interpreting the colors probably won’t take the action. 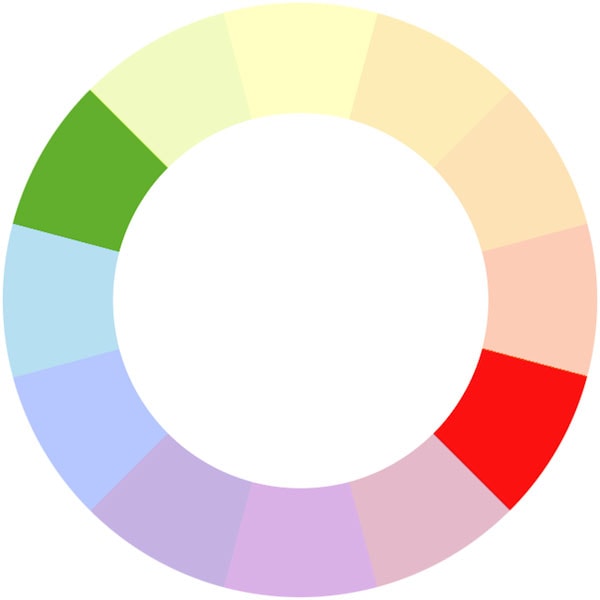 Using red and green next to each other would certainly be a mistake. You’ll also want to consider the background color behind the button. For example, a green button on a blue background will just disappear because the colors are too similar. This effectively cancels out any action the user might take and causes analysis paralysis. 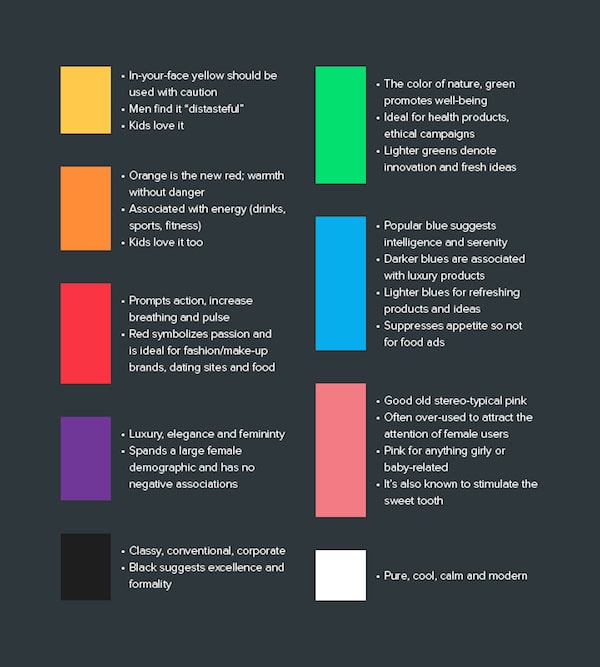 So it’s not only necessary to be careful about what colors you choose for your buttons, but it’s important to also ensure that you choose contrasting colors to the rest of the page and for accompanying buttons.

Place Your Button in a User’s Path

Where on the page you place the button is just as important as its color and the text on it or accompanying it.

Buttons should definitely appear prominently on the page.

However, consider the user’s path through the page. As Jeremy Smith points out in this excellent Crazy Egg blog post, buttons need logical placement as to where the user is going to next. You’ll want to consider how people actually read the page.

The F-pattern is the standard for sites with a lot of text, such as news site or blogs. The user’s eyes will scan across the page, left to right, then go left before dropping down and scanning across the page again. In the example below, you’ll want to have your call to action where the eye ends as it scans left to right. 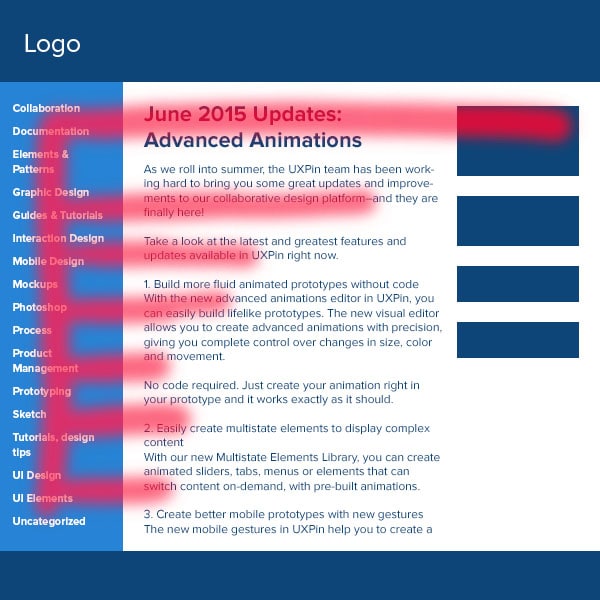 You’ll find this pattern when content is more spacious and the user’s eye will scan the page like Zorro carving a Z. In the example below, you’ll want to place your call to action along the Z line, preferably near the end of it. 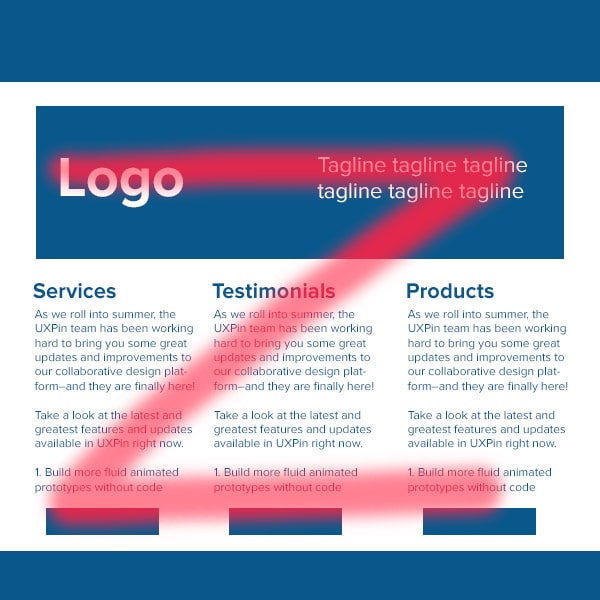 These patterns allow you to put the button within the user’s path. After all, you wouldn’t want to bury the button in the footer where no one will ever see or click it. Finally, don’t be afraid to use web conventions — there’s good reason why things are commonly placed where they are, because they work.

Let’s go through some considerations that Gabrielle Gosha outlines in her excellent Sitepoint article: 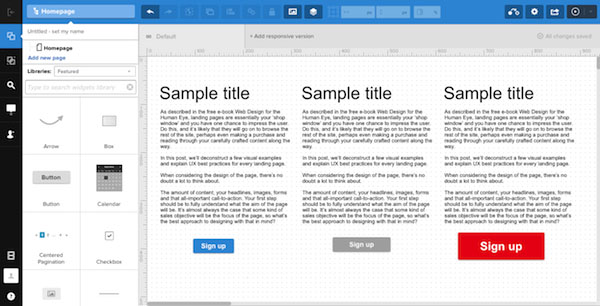 As you can see in the above illustration, three different calls to action have different impacts. The left CTA is small yet hard to miss; the center is unobtrusive; the right is so large that it distracts from the content above it. Color and size make all the difference.

Avoid getting too artistic when it comes to creating buttons and keep them simple and rectangular in shape. Replacing a perfectly crafted button with clever text or a GIF rarely results in a good experience for the user – it just confuses them as they are faced with something that’s unfamiliar.

As Kamil Zieba stated in Web Design for the Human Eye: “Clarity comes before cleverness.” Don’t use a button label like “Cool, let’s rock it!” if “Submit” communicates the action better.

Buttons should be rectangular because again, that’s what we’re used to. We understand how such buttons function.

According to Paul Olyslager, these rectangular buttons should also have rounded corners as studies have shown that these perform the best. This is because rounded corners draw attention to the inside of the button as they point inwards. It’s also because we’ve evolved to avoid anything with sharp corners as human beings, as they represent a threat of injury.

We suggest that you read Paul’s four-part article for more information on all aspects of button design, including size.

Before we move onto button placement, a quick word about floating action buttons (FABs) which have become more popular in recent years.

FABs are generally circular buttons which ‘float’ above the user interface and are “used for a promoted action”. We’re seeing more sites use them “to represent the single action users perform the most on that particular screen,” says graphic designer Teo Yu Siang.

A FAB ‘floats’ on top of the regular content and can encroach on other elements, as well as distract the user from the rest of the content.

Siang goes on to point out that while they seem to be a great idea, and provide good UX in ideal scenarios, in reality, widespread adoption of FABs might actually harm the overall UX.

This is because they reduce the immersive experience as they are overlaid on top of every single UI element on the screen. This distracts the user from the overall experience and as such, you should take care when adding FABs to any page as it could be counterproductive.

Not only this, but as Siang says,

“By taking up real estate on the screen, the FAB effectively blocks content.”

This isn’t to suggest that you shouldn’t use FABs at all, but you should certainly take care with their use and placement as they can reduce the number of users taking the desired action.

Creating an effective call to action depends on several factors, including relative size, color, and text. We’ll create a quick example with UXPin to illustrate some best practices we just described.

The largest, topmost elements get the most attention. 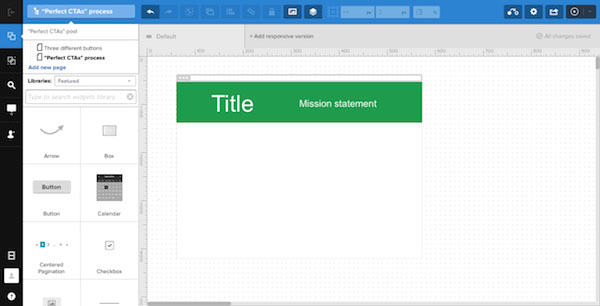 Subtitles come next: bits of text that, being less prominent, create a hierarchy of attention. 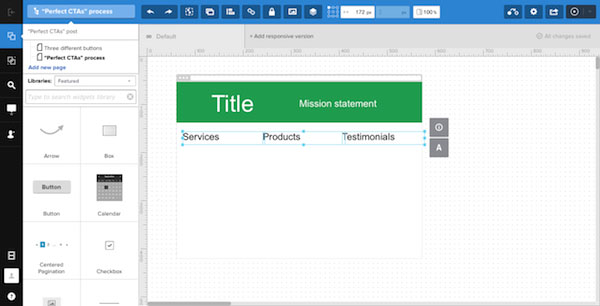 There’s a chance that people will skip from the subheads straight to the buttons, but often they need to know where each button will take them. The “sales pitch” text explains in detail why users should click each call to action. This content is a promise: What will tapping a button get you? 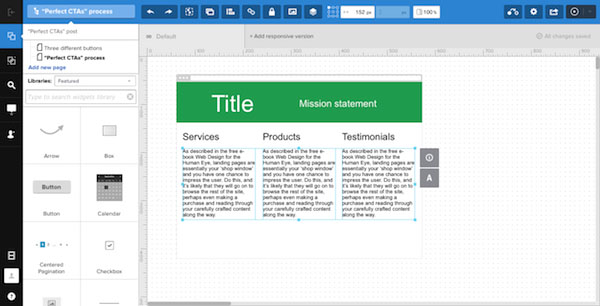 The calls to action themselves occupy the third tier. Why? 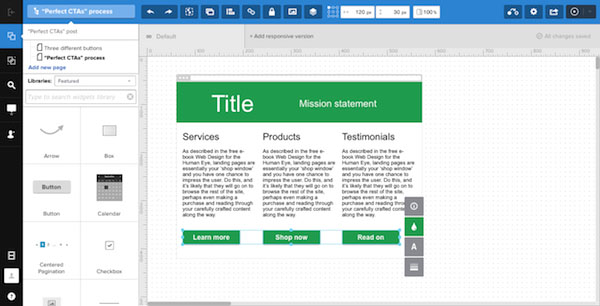 This pattern takes advantage of Western languages’ left-to-right flow: Because people are already accustomed to reading from the top left to the bottom right, arranging elements that follows conventional thinking feels natural — even if readers aren’t aware of it. 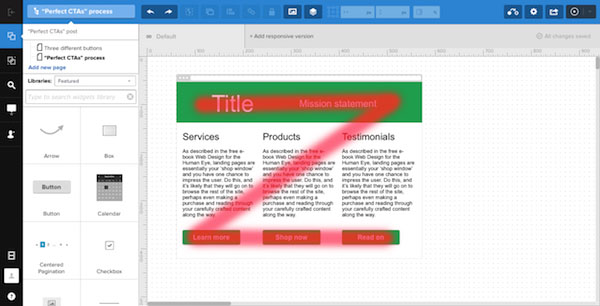 So that wraps up our discussion and tutorial. If you’d like to learn more about creating effective CTAs for good UX design, check out some of our favorite resources below.