You’ve heard this before: “Sign a written contract for every design job! And most importantly, sign it before starting to work!” What you don’t often hear is the answer to, “What do I have to sign, exactly?”. This is particularly important in those cases where your receive a contract from your client. You want to know if they are making reasonable requests, and not hiding some tricky provisions in the legalese.

Let’s break down the most frequent contract types that a freelance designer will encounter sooner or later in his/her professional life, and let’s try to take the mystery and fear out of them. A contract is a pretty important business decision, and you should understand 100% of what you sign. So, read on and try not to fall asleep.

A web design contract is nothing but a service agreement where the service provided is… code production. If you are a web designer, this Website & Identity Design Contract is a good starting point. 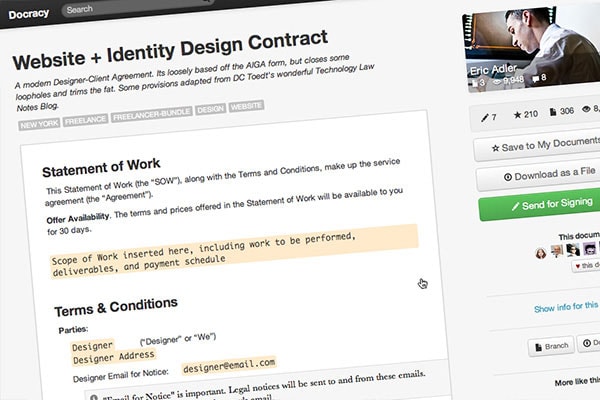 First, you have to draft the Statement of Work (SOW), which should repeat the content of the proposal, plus everything else that you agreed with the client. It is worth being detailed here, as you might want to charge for some extra work that comes up later in the project. The contract includes a clause for this called “Change Request”, which automatically triggers your standard hourly rate for that extra work not originally included in the SOW. This is something potentially worth hundreds of dollars!

The best way to be on time with deliverables is to follow what I call “the rule of every relationship” (couples included): underpromise and overdeliver. Set up an acceptance process and give your client a reasonable amount of time to review what you have done. Then, after every milestone, everything can be automatically deemed accepted:

Other featured provisions are the “Design Tools” clause and the “Kill Fee”. The former enables you to retain full rights for those snippets of code or fonts that you incorporate into multiple projects. At the end of one project, you will likely assign the ownership of your work to the client, but these tools will be licensed separately, so you can recycle them; you are just giving the client permission to continue using the tools. The kill fee is a designer’s best friend: if the client cancels the project after you have already started working, you need to be paid a percentage, or at least a fixed cancellation penalty.

Does this seem too complicated? Try to send a plain-English agreement instead, like Dan Wong’s.

It follows the principles of the “contract killer” philosophy: a document that does not hide the real deal behind legalese and shifts the focus from self-protection to transparency and fairness.

Your killer contract should have:

Your lawyer might not like this contract, but the stats show how popular it is among web designers!

If you are more of a graphic designer than a coder, all the stuff above still applies, but you can start from something more focused on the graphic arts, like this Illustration Offer, that will help you retain as many rights as possible while being reasonable. This sample refers to “Artists” but a version has been made specifically for “Designers” as well.

Another great starting point is this Short Form Design Contract, which protects your right to show the project on your personal portfolio and keep all the sketches and preliminary works that end up not being used. As the author says:

The next time a client comes to you with a quick job, save yourself time and aggravation by sending them a Short Design Contract to be signed BEFORE you start working. The doc is basically an abbreviated contract confirming the scope of the job, the schedule, fees to paid and essential terms and conditions. Use this style of contract for quick jobs or where a full-blown contract would make the client apprehensive.

Expect clients to oppose IP provisions very favorable to you. Some won’t want their logos or illustrations used for ads or contest, and some want to be the exclusive owners of what they paid for. If this happens to you, try to understand their concerns and negotiate a good compromise.

If you are something more that a one-man design shop, your best bet is probably AIGA’s Standard Agreement for Design Services, which is the closest thing to the industry standard for design contracts. It’s a pretty complicated document, and you can find some legal guidance in the PDF version, but the main thing to understand is that this agreement has 3 different variations: one for print, one for web publishing and one for three-dimensional works like product prototypes and installations. 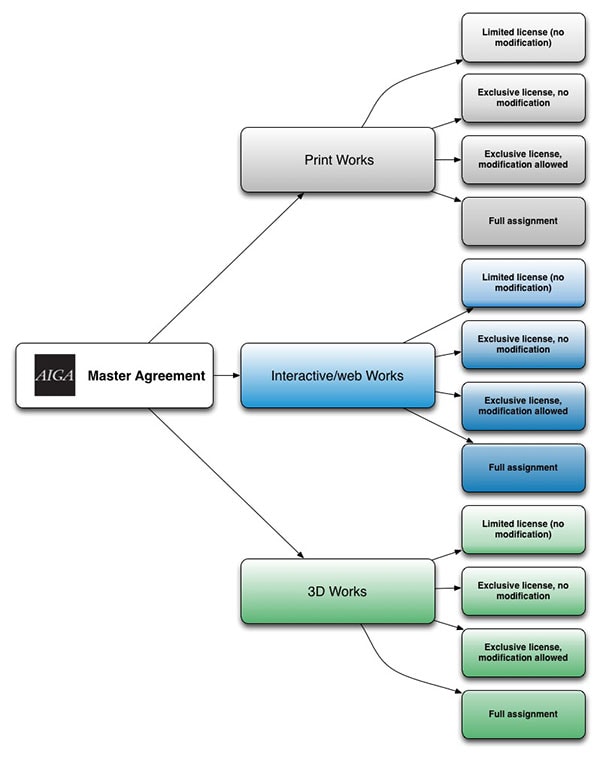 On top of those, you can choose from 4 different licensing models, in order of scope:

You can also consider a lighter version of the AIGA model, like this Design and Development Contract.

Many times design contracts take the form of consulting agreements or independent contractor agreements. The “operational” part usually remains the same (SOW, milestones, etc.) but the contract will usually include a IP (intellectual property) assignment provision to make sure that everything you create during the project is automatically assigned to the client. This is very different from the licensing flexibility that we just saw and, particularly when the contract is drafted by the client, leaves room for clauses that are not designer-friendly. 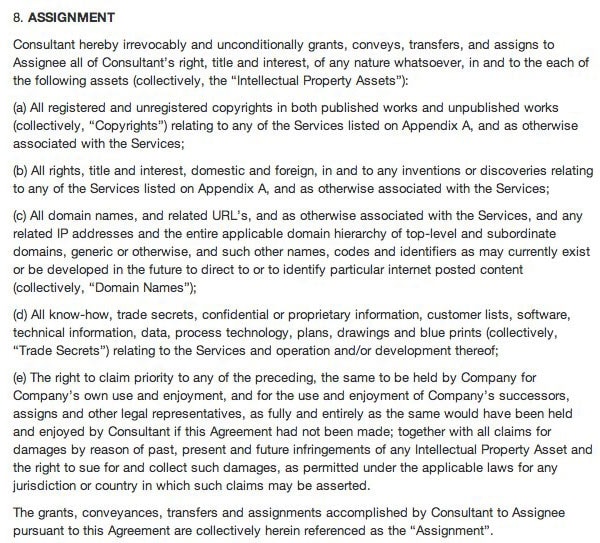 This clause is from a client-friendly contract for web development projects, that also includes a confidentiality agreement.

If you want to be paid by the hour, this Consulting Agreement template is pretty standard among technology companies.

When working for corporate clients, you are often asked to sign another type of contract called “work-for-hire”. For creative professionals, it is always preferable to have a service agreement where you are able to license your work (or at least separate payment from IP assignment), but some clients will only sign a work-for-hire, such as a this Freelance Writing Agreement or this Work For Hire Agreement for Video Production.

You should now be prepared to sign your next contract! Here are some takeaways you don’t want to forget:

Disclaimer: This article wants to be useful and informational, but keep in mind it is not legal advice and all the legal documents cited are only to be used as a starting point. The author, DesignModo, Docracy and the original authors of the documents cited disclaim any liability connected to the use of these material without a licensed attorney.

Veronica Picciafuoco is the Director of Content for Docracy.com, the home for free, open source legal documents. She has a legal background and works closely with tech startups and freelance designers in Brooklyn, NY. You can find her on Twitter, Linkedin and Tumblr.