Dreamweaver CS6 Review – Is it time do ditch Notepad++?

I’m the kind of Notepad guy. Back in 2005 the only tools I had to help me learning HTML and CSS were Notepad (yeah, that simple notepad, from Windows) and Firefox (no I didn’t know about firebug back then, my debugging process was kind of awful). So, when I was introduced to Dreamweaver MX 2003 I just got amazed.

Code coloring and auto closing tags were luxuries that I just wasn’t used to. And at first my overall performance increased a lot. But as the years were passing by I noticed that I wasn’t that into it anymore. The software was just getting bigger and bigger, but the tools were still the same. Then around 2008 I completely stopped using it to start using the fastest editor I’ve ever seen, Notepad++.

Since then I heard a lot of opinions on new editors out there but I just kept using the same ol’ editor, even though my development process includes a lot of other Adobe products.

So, after testing the amazing new features of Photoshop CS6, I was wondering if Dreamweaver CS6 has made same great improvement and I gave it a try during the 30 days trial (10 remaining!). We’ll see here the greatest features for an experienced coder, and how you can get the most out of it.

Old stuff that is still awesome

We have a few features that haven’t changed a lot through the years, but still worth mentioning. 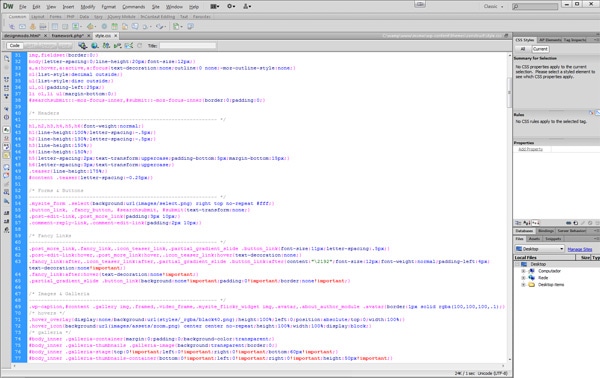 Don’t know why, but the default code style in Dreamweaver CS6 is just awesome. And it has been like this since forever.

It’s not just the opening tags suggestions, but it has a complete auto-complete list for attributes and values, color picking, and the most awesome thing ever, the auto closing tag based on your current document structure (which will be a problem for those HTML5 guys who likes to omit closing tags when possible).

This is something default for many editors also, but I just like the way Dreamweaver presents you the error as you type. It’s the kind of thing I was long missing on Notepad++. 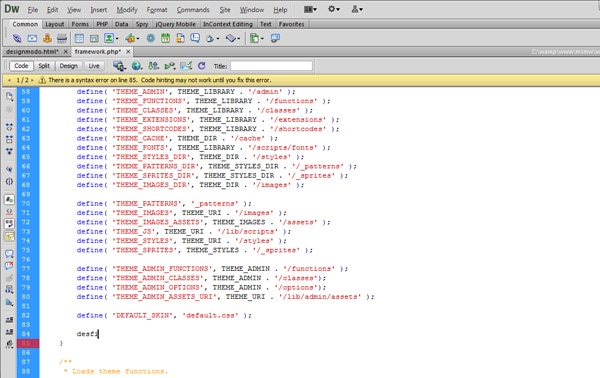 Just save and press F12 to automatically open your current document in your browser. Not to mention the split, design and live preview that is just awesome and save you a few minutes of ALT + TAB and F5.

The file browser as a panel has always been a good thing in my opinion. And I don’t know why it just doesn’t works well for “simpler” editors like Notepad++. You can install a plugin there for such functionality but in my case I just forgot about them, and kept using the windows browser.

Ok, probably you already knew of the old stuff on Dreamweaver, so let’s move on to the new and awesome stuff on it. 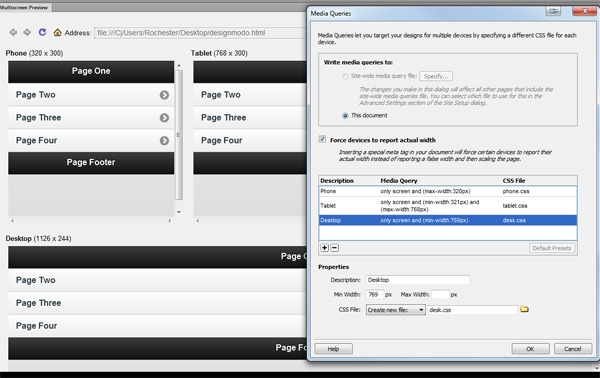 And now it just got far easier to test and develop responsive websites.

Dreamweaver has a lot of cool things added for media queries and fluid design, and also has added a multiscreen preview, where you can easily check how your design will look like in different screen resolutions at once.

It’s not just about the preview, it allows you to easily add media queries with default presets and your own custom values for screen sizes so you can easily turn any site into a responsive one with a few clicks, and add new sizes if you need to.

CSS3 Transitions, and lack of HTML5

Dreamweaver has also added quite a good support to CSS transitions and a few other CSS3 properties. But if you’re willing to insert HTML5 elements you’ll be in your own, since I didn’t find any HTML5 element there.

On the other hand, for those who are used with simpler editors (like I am with Notepad++) just the CSS and media queries support will be a huge time saver.

Native apps making use of Phonegap

PhoneGap gets your HTML + JS apps and turn it into native apps for a variety of smartphones OSs. The cool thing about Dreamweaver CS6 is that it automatically sends your project to PhoneGap so you’ll get the final build ready to be downloaded to your phone or added to app stores. 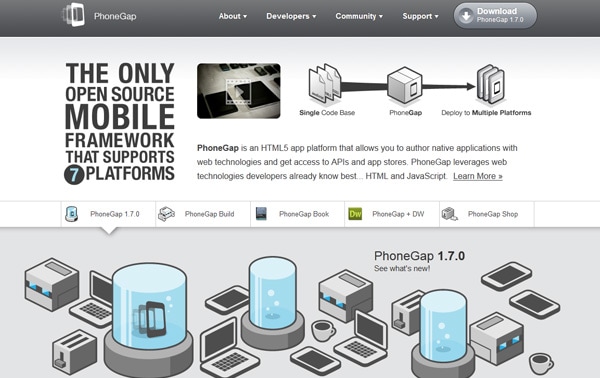 You can set up fast websites using Adobe’s platform, the Business Catalyst.

So, if your client is willing to pay $6 per month or more on this structure, that could be a good and fast option to set up stuff and even allow the client herself to control items. That could be a great option also if you aren’t too much a backend guy.

Dreamweaver CS6 has added great support to jQuery mobile and its components. The very first thing you’ll notice is the ability to create a new page ready for custom jQuery mobile there, which means that Dreamweaver CS6 will create the files for you and separate the theme files of the functionality files.

Also, you are able to edit jQuery Mobile components on the go, since you have the jQuery Mobile Swatches, which contextually shows the options for each jQuery item you have and also allow you easily changing themes, icons, positions. 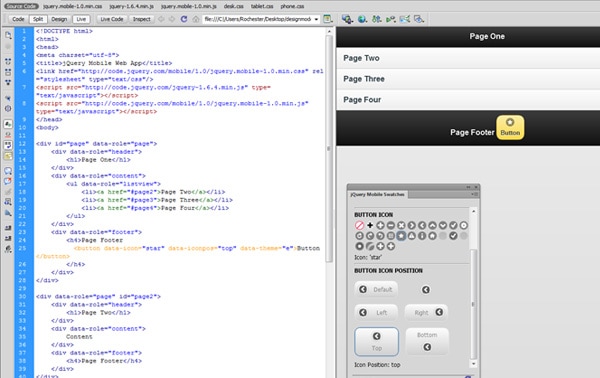 The biggest PRO, the price

The current price is $399,00 which is not that attractive, and it gets only slightly better if you want to go to the student discount, $179,00.

But the new awesome thing from Adobe is the Creative Cloud, that allows you to access Dreamweaver CS6, Photoshop CS6, Illustrator CS6 and many other applications for a monthly rate of $49,99 or $29,99 for student version.

Many freelancers out there can pay this bill with an hour of work (or even half an hour). If you think about the productivity improvement you’ll get just with the responsive features, you’ll see that it’s far more than one hour per month, so, in my opinion, it totally worth the price since you’ll get a lot of other applications in the Creative Cloud pack that will just increase the time you are save by using all of them together.

A web designer and entrepreneur from Itajubá (MG), Brasil. Just loves writing about obscure topics and doing some cool stuff. Get in touch at @roch_br.