AngularJS: A Detailed Guide for Beginners

If you’ve not got your hands on AngularJS yet, you’re missing awesome features that can really make the most of HTML for web apps. Unlike Backbone.js and Ember.js, AngularJS is a next generation JavaScript framework where each component works with every other component in an interconnected way to make your web applications stand out.

This article is designed to give a comprehensive knowledge of AngularJS, a structural framework for dynamic web applications, without reading a lot of unnecessary stuff. You will learn what AngularJS is, what its most compelling features are and how to get started with it.

AngularJS is an open-source web application framework designed with the aim of making development and testing tasks easier for web developers. It is a fully extensible client-side MVC/MVVM framework that runs with no library dependencies and also works well with other libraries. Being pure JavaScript, Angular JS is perfect for creating one-page web apps that only require client-side languages such as HTML, CSS and JavaScript. The best thing is that you’re allowed to modify or replace its any feature to fit your unique development workflow and project requirements.

Developed in 2009 by highly talented Google engineers Miško Hevery and Adam Abrons, AngularJS is a “superheroic JavaScript MVW framework for dynamic web apps” which enables you use HTML as your template language and allows you to extend HTML vocabulary, so you could express your application’s components in a clear, concise manner. Helping you structure and test your Javascript code better, AngularJS teaches the browser how to be an ideal partner with any server technology by making use of dependency injection and inversion of control. The main goal of this structural framework is to augment web apps with MVC (Model–View–Controller) capability.

Unlike many other frameworks, AngularJS is an advanced framework that has some outstanding features which are equally helpful for not only developers, but designers. Below are some amazing features of AngularJS, which enable developers create next generation web applications.

Directives is the most unique, dominant and powerful feature available only in AngularJS. They allows developers to create custom and reusable HTML components, which can be used to hide complex DOM structure and “decorate” certain elements with behavior. They enable you extend your HTML by letting you invent new HTML syntax, and instruct AngularJS to incorporate its functionality into the page. Prefaced with ng-, all of the Directives take place in HTML attributes and work as standalone elements.

Following are some of the most used Directives:

Below is an easy example of a directive, which first listens for an event and then makes required changes in its $scope, accordingly.

You can make use of this custom directive as following:

Data-binding is the second most powerful and compelling feature of AngularJS. It eliminates a considerable amount of unnecessary code you’ve to write by releasing the server backend from various templated responsibilities. Generally, 80 percent code base of a typical web application is dedicated to manipulating, traversing, and listening to DOM events. Angular’s data binding hides this code, letting you focus on other vital aspects of your web application.

Generally, in most templating systems, data binding occurs only in one direction. The classical template system merges template and model together into a view. After this one-time merge, changes made in the model components and other sections of the view are not reflected in the view automatically. Worse, any alterations made by the user to the view are also not reflected in the model. This means, in order to constantly sync the model with the view and the view with the model, developers need to manually manipulate the elements and attributes of DOM.

When a user makes any change to the view, this process becomes even more arduous and complicated. Because then, the developer is responsible for interpreting the user interactions, merging them into the model, and updating the model whenever any changes occur in the view. 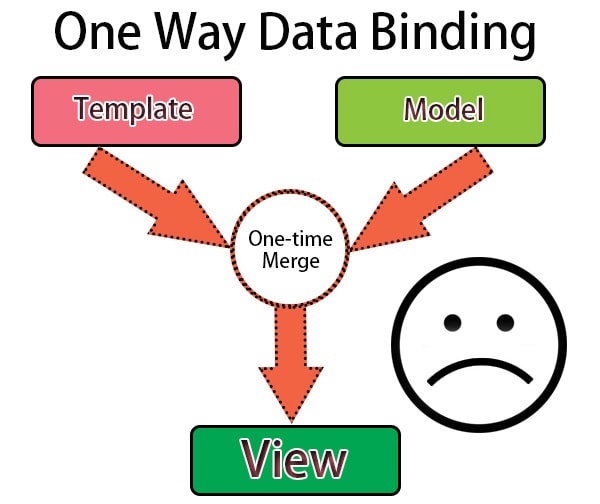 On the other hand, the AngularJS template works in a different and better way. Saving the developers from putting data into the view manually, it automatically synchronizes the data between the model and the view, and vice versa. 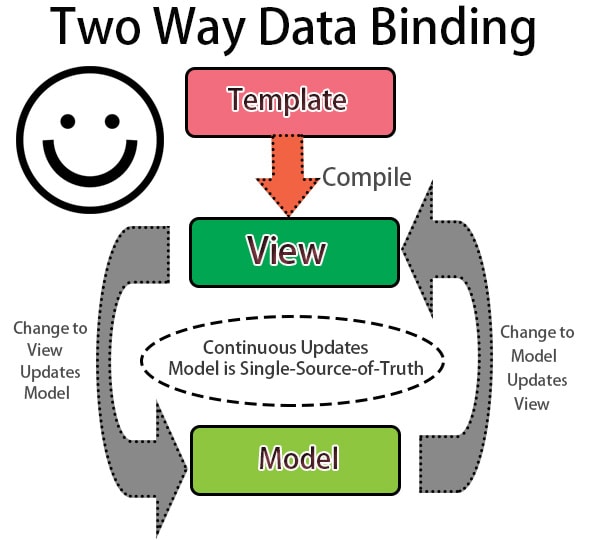 Here is a simple example where binding of an input value to an <h1> tag is demonstrated.

AngularJS comes with a built-in injector subsystem that is in charge of creating components, looking up dependencies, and passing them to other components when needed. The dependency injection in AngularJS enables developers to declare how the web app is wired. By taking advantage of dependency injection, AngularJS carries traditional services – like view-dependent controllers – from server side to web applications on client side. Thus, much of the burden on server backend is reduced, resulting in a much lighter and faster web application.

In order to access core AngularJS services, you just need to add that service as a parameter. AngularJS will automatically detect that you’ve requested that service, and will provide you an instance.

Moreover, you can also define your own custom services and make them easy to get to injection.

In AngularJS, templates are written with HTML, containing Angular-specific components and attributes. AngularJS merges template and information (from the model and controller) together to render the dynamic view for a user in the browser.

Below are the types of AngularJS attributes and elements that are used:

Here is an example, showing a template with directives and double curly-brace notations:

In a simple web application, the template has Angular directives, HTML and CSS in only one HTML file (such as index.html). While in a complex application, you can show multiple views in the main page by making use of “partials” that are segments of template, which resides in different HTML files.

Given the fact that JavaScript is a dynamically typed language which comes without any help from the compiler. For this reason, the AngularJS team has designed AngularJS to be testing ready since they feel very strongly that any JavaScript code should go through a strong set of different tests. AngularJS ships with many built in incredible testing features, which make it as easy as possible for developers to test their web applications.

For end-to-end testing, AngularJS uses “Protractor,” an end to end test runner which removes test flakiness by understanding how Angular works internally and emulates user interactions with your app. With AngularJS, you can also perform Unit testing for testing individual units of your code. Best of all, the Angular team has built an extension for the Google Chrome browser, called AngularJS Batarang, using which you can easily detect performance bottlenecks and debug your applications within browser.

Getting Started With AngularJS

Building web apps with AngularJS is as easy as 1-2-3. To get started, you just need to add a few attributes to your HTML. Follow the steps given below to get your Angular app up in just 5 minutes.

Add the ng-app directive to your <html> tag. It’ll tell Angular where it should get activated, declaring the page as Angular application.

Now put the Angular <script> tag in your page, just before the ending of <head> tag.

In the above code, the ng-controller directive defines the JavaScript class for a given action, while the directive ng-repeat (which is an Angular repeater object) instructs Angular for creating list elements as long as visitors are available to display.

Let me know what you think about AngularJS in the comments below:

Ajeet is an experienced web developer at WordPressIntegration. His current love interest is AngularJS, and he is also passionate about writing on WordPress, HTML5, CSS3, and Responsive. Don't forget to follow @Wordpress_INT to get latest updates via Twitter.