The first three months of 2015 have passed and some new web design trends have started spreading throughout the design world. Among them are the so-called “tile design” and the love for websites which feature only one color.

However, typography, which has always been an important element in modern graphic design, will become more and more dominant in our works.

In particular, there seems to be a propensity toward the use of typography to create large and eye-catching headers or landing pages, which are the first things that people see in a website. Therefore, if you want to distinguish yourself from the mass, you should know which are the best fonts you can use in your projects.

That’s why we decided to featured the highest quality fonts released so far in 2015. If you think that there are some fonts we have not included, let us know. 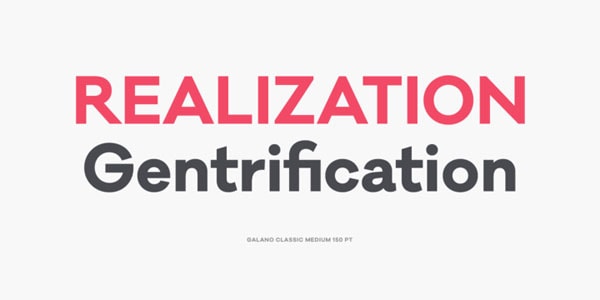 Galano Classic  is a font created by Rene Bieder and it is inspired by the classic grotesque style of the early 20th century. Galano Classic is characterized by the presence of classic geometric faces which coexist with more modern proportions.

Moreover, some letters have interesting and elegant details: The uppercase “R,” for example, features a long stretched leg while the uppercase “Q” is very similar to a stylized magnifying glass.

The font family consists of 10 weights with matching italics, each containing about 500 glyphs. Galano Classic may be used for different purposes; it is suitable to create big and solid headings but it also works perfectly in small sizes and long text.

The family costs $200 but it is definitely worth it. 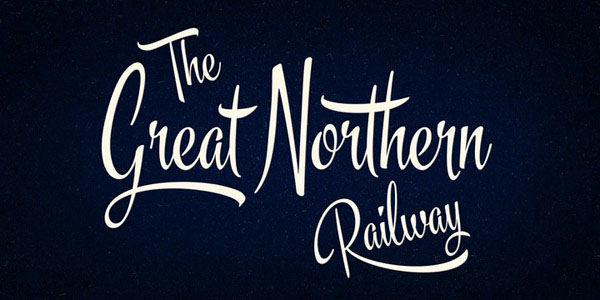 The Frost series from Fenotype is a smooth font designed by Emil Karl Bertell.

The family not only contains the script in three different weights but also includes useful ornament and banner sets, caps and small caps. The designer was influenced by the hand-lettering and the sign painting style from the 1950s and 1960s; the result is that Frost is very polished, regular and linear and it perfectly suits the design trends of 2015.

Therefore, you will get a versatile family of fonts which may be used in several works. We suggest you using Frost for fascinating headings.

The font can be downloaded for $69. 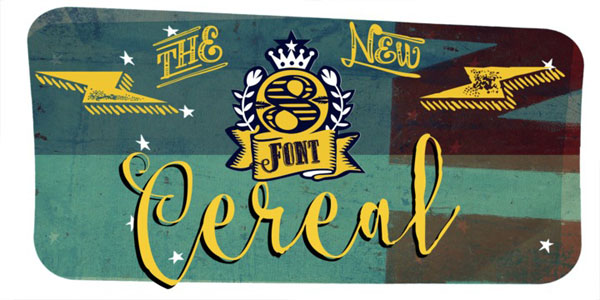 Cereal is a font family designed by Carlos Fabian Camargo and released by Andinistas. The pack includes eight fonts which work in groups or independently. They are designed to create compositions of words and phrases that need to communicate a warm climate. Since Cereal has a high imaginative and visual power we recommend you to use this font in book covers, website homepages, logos, posters or even for wedding invitations.

The font family has over 150 glyphs with special words and effects thought to attract attention at first sight.

In the pack you can also find Cereal Dingbats — a collection of more than 100 drawings, such as arrows and lightning, which may be used to decorate your piece of art.

The price of the family ranges from $64 depending on which version you download. 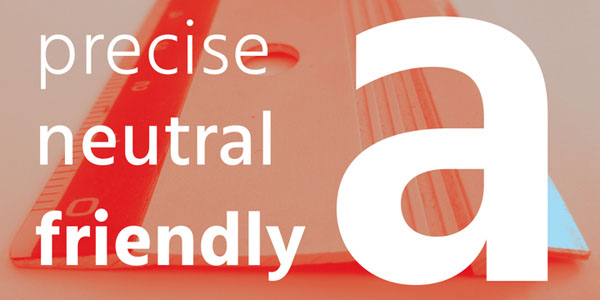 Mute has been made by Manushi Parikh and it is an elegant sans serif typeface. It was mainly developed for works related to mobile applications and in particular for user interfaces.

Since the font is precise and linear, we think that you can use it in the homepage of your website to express a friendly aspect. The letters have low stroke-contrast and terminals end on the horizontal or the vertical, making the apertures open and the counter forms between characters very clear.

By downloading the font you will get five different variants, each including 386 glyphs. 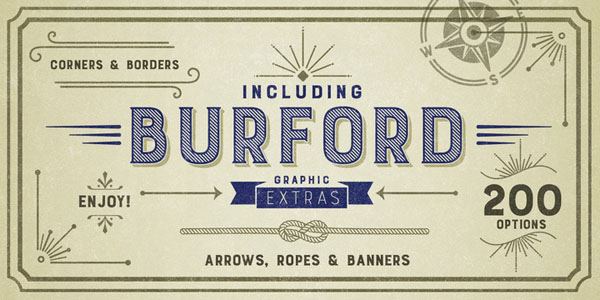 Burford is a font family designed by Kimmy Kirkwood. He says to have been inspired by all the unique typography that he saw while traveling in five different countries in Europe.

The Burford Pro package comes with 18 layering fonts including five base layers, three top layers, five bottom layers and two sets of graphic elements. They have been created with the purpose to place them on top of each other, creating an amazing and easy to use layer-based family.

Burford Basic is for those who don’t use graphic programs and for those who are not interested in the layering effect. Indeed, Burford can still be a useful typeface since each font can also be used on its own, without overlapping layers.

The font can be downloaded for $75. 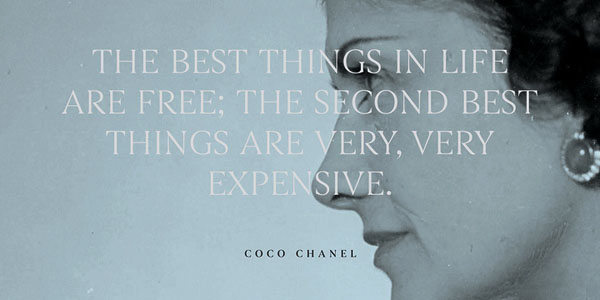 Begum is a font created by Manushi Parikh and published by the Indian Type Foundry. Although it is a serif font, which has some common traits with the Times New Roman family, Begum has a contemporary appearance.

According to Manushi Parikh, the font was designed for short-length text as well as for longer introductions but it works fine on packaging too. 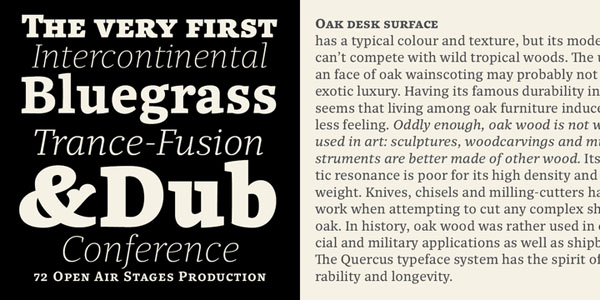 Quercus, by Frantisek Storm, is a serif font inspired by the old classicist typefaces. It is characterized by an open, but also slightly condensed, style where the neighboring letters never touch each other. The pack comes with eight interpolated weights with their respective italics.

Thanks to the huge combinations you can choose from, Quercus Ten can be used for any kind of design, especially on the web. However, we suggest you trying the font for book covers and posters too. 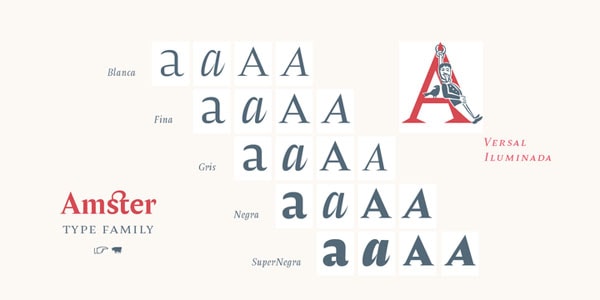 Amster is a font designed by Francisco Galvez and published by PampaType. It is an energetic and refined serif type whose aim is to show how elegance and legibility can meet together in a unique typeface.

Amster can be used to produce text that is easily readable but also nice and friendly. It has five weights of italics with small caps and, in the pack, you can also find an interesting set of decorated initials. Amster is very versatile; it can be used for screen works or printed ones, for small or large text, for scientific purposes but for poetry, too.

Amster can be downloaded at a starting price of $60. 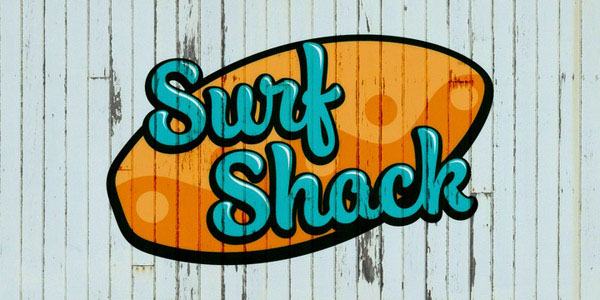 Bali Script, by David Rowland, was inspired by the Bali’s relaxed feel and easy going atmosphere. Indeed, according to the creator, Bali Script is a tribute to the hand-lettered signage which can be seen on beach bars, surf shacks and cafes which are typical of Bali.

The font features solid stroke endings, sinuous shapes and it has a general gooey look which expresses an idea of freshness and simplicity. Therefore, Bali Script is perfect for informal posters, logos and websites. 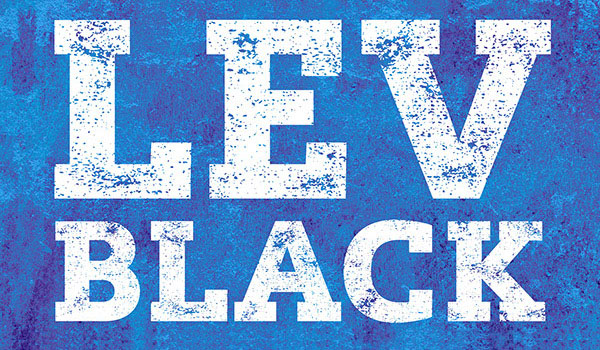 Lev Black Distressed is a typeface designed by Leon Hulst of TypeFaith. When you download the package, you will get access to a font which is perfect for posters, packaging, clothing and infographics.

Lev Black Distressed is a slab serif font and is characterized by a contrast between the rectangular thick serifs, the straight angled shoulders and the curves.

This font can be downloaded free. 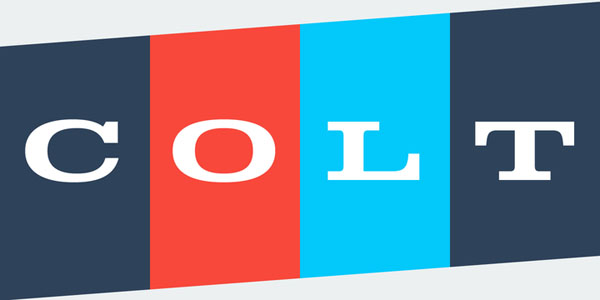 Colt is a font by Mattox Schuler and released by Fort Foundry.

Colt aims to concentrate power and finesse in the same letters. The wide form of letters is inspired by the love for type used on motor vehicles made in the ‘60s.

Although a lot of typefaces are created to conserve space in order to fit more characters on a line, Colt stands on the opposite side. With wide letterforms, Colt is thought to be the leader of the work.

Indeed, this font can be used as the primary typeface in a composition but it can also play a supporting role in the design.

The Colt family can be bought for $49.